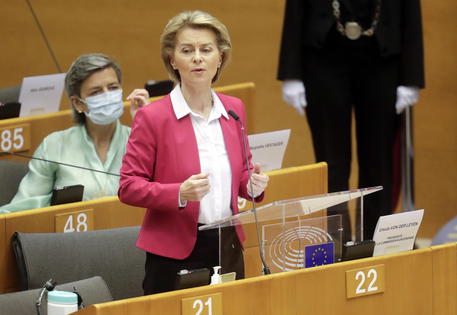 (ANSA) - Rome, May 28 - The European Commission's proposed 750 billion euro Recovery Fund and the new multi-year financial picture were at the centre of a phone conversation Thursday between Premier Giuseppe Conte and EC President Ursula von der Leyen, the premier's office said.
Italy would get 172.7 billion from the fund, about 81 in aid and 91 in loans, if it is approved.
But the proposal faces tough talks with northern European deficit hawks saying all the funds must be in the form of loans, not grants.
European Economic Affairs Commissioner Paolo Gentiloni said Thursday the fund would have no strings attached and would be voluntary, with countries filing an application in October along with their draft budget.
But EC Vice President Valdis Dombrovskis said the funds would be granted in tranches and linked to objectives and reforms.