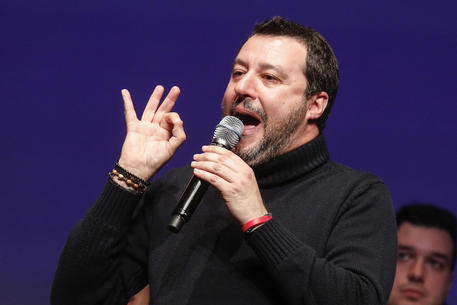 (ANSA) - Rome, February 17 - Lazio Governor and ruling Democratic Party (PD) leader Nicola Zingaretti on Monday tweeted that the "only uncivil choice is to question women's rights" after opposition right-wing League leader Matteo Salvini said abortion should not be a "remedy" to an "uncivil lifestyle".
Zingaretti's statements as he announced a visit to the women's rights association Casa Internazionale delle Donne in Rome came after Salvini, an ex-deputy premier and interior minister, said: "We have heard that some women, neither from Rome nor from Milan, have gone for the sixth time to an ER in Milan for an abortion".
"It is neither my duty nor that of the State to give moral lessons, it is right for a woman to choose for herself and her life, but you can't go as far as taking the ER as the solution for an uncivil lifestyle", Salvini said during a rally in Rome.
"Someone has taken the emergency room as a healthcare cash machine to do her business without paying a lira", he said, referring to the Italian national currency before the euro.
"The third time you arrive, you pay".
Salvini, who makes no secret of his Catholic faith and brandishes religious symbols at rallies, doubled down on his controversial comments on Monday.
"Abortion is not a contraceptive system", he said.
Salvini's comments stirred ire from feminists and women MPs, especially on the centre left.
The League leader makes public profession of a deeply Catholic religious faith.
He has espoused a nationalist, anti-migrant and tough on crime stance that has propelled the League to top place in the national poll standings.
Salvini was in an all-populist government until last July with the anti-establishment 5-Star Movement (M5S).
He pulled the plug on the alliance hoping to convert his poll standings into a snap election win.
His election bid was foiled when the M5S teamed up with their long-time foes, the centre-left Democratic Party (PD).