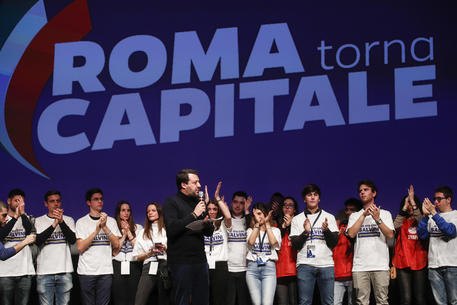 (ANSA) - Rome, February 17 - The nationalist League party on Monday opened its first office in Rome.
It follows a rally in the capital Sunday at which leader Matteo Salvini vowed a strong challenge for the Rome city government in elections next spring.
Since taking over the party leadership in 2013, populist strongman and former interior minister Salvini gradually turned the party from a regionalist to a nationalist one.
It had formerly been the Northern League and had once advocated secession of the affluent north from the rest of Italy, which it portrayed as lazy and parasitic.
Salvini dropped the 'northern' from the name a couple of years ago as he sought to take its populist appeal nationwide.
After once being totally absent in the south, it has performed quite strongly in some southern regions.
Meanwhile it is challenging the centre left in many of its central Italian heartlands.
It wrested Umbria from the centre left last year.
But in a setback to Salvini it failed to take Emilia-Romagna last month.
The League still aroused hostility in sections of the southern population, who have not forgotten decades of insults.