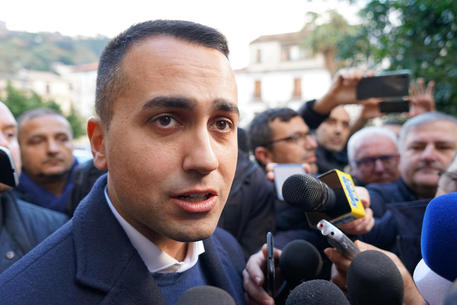 (ANSA) - Rome, January 21 - Two more MPs from the ruling anti-establishment 5-Star Movement (M5S) defected and joined the mixed caucus on Tuesday.
Michele Nitti and Nadia Aprile's departures brought to about 10 the number of MPs who have left Foreign Minister Luigi Di Maio's party in recent weeks, not counting a Senator who was expelled for voting against the budget. Di Maio's leadership has come under increasing pressure recently.
The guarantee committee of the M5S) on Friday confirmed the expulsion of journalist and Senator Gianluigi Paragone.
Senator Paragone reacted angrily after being ejected from the M5S for having voted against the government's 2020 budget law.
"I have been ejected from nothing," said Paragone, who was a high-profile television journalist before embarking on a political career.
The expulsion added to the turmoil the anti-establishment M5S is enduring after several lawmakers defected to their former alliance partners - Matteo Salvini's rightwing nationalist League party.
Foreign Minister and M5S leader Di Maio has said that the movement will hold an 'estates general' conference on March 13-15, saying it must be united.
M5S bigwig Alessandro Di Battista, however, expressed support for Paragone.
"Gianluigi is infinitely more 'Grillino' than many who say they are," Di Battista said in a comment on social media using the 'Grillino' nickname given to M5S supporters derived from the name of founder Beppe Grillo.
"There has never been a time that I did not agree with him," read the comment on a post by an M5S activist.
Paragone said he plans to appeal against the decision by the M5S's disciplinary panel of arbitrators.
"(They have decided that) Paragone must be expelled because he is a strange preacher who makes us look in the mirror," Paragone said in a video on Facebook.
"Well, this Paragone will appeal to the arbitrary injustice of the arbiters of nothing, led by someone who is nothing and claims the right to expel me.
"I will appeal and, if I feel like it, I will also turn to ordinary (civil) justice to show the arbitrary nature of the rules".
Paragone was also defended by members of other political parties.
Former junior minister and member of the small leftist Free and Equal party, Stefano Fassina, said "political dissent motivated by serious arguments must be tackled with discussion and political clarification, not with disciplinary panels of arbitrators.