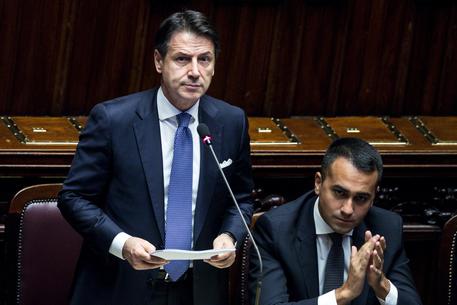 (ANSA) - Rome, September 9 - Premier Giuseppe Conte told the Lower House on Monday that his new government is seeking to bring in a "new season of reform". The premier was presenting his programme ahead of the first of two confidence votes that the executive is set to face in parliament. Conte's second government based on the alliance between the anti-establishment 5-Star Movement (M5S) and the centre-left Democratic Party (PD). The two groups, traditionally fierce rivals, made a pact after League leader and former interior minister Matteo Salvini pulled the plug on Conte's first government last month. Conte said that his new government must be distinguished by "sobriety and rigour so that our fellow citizens can look at the institutions with renewed faith. "All of my ministers and I take the solemn commitment before you to be careful with our words and to use more appropriate language, which is more respectful to people and diverse ideas," added the premier.
Conte said that the "challenge on the domestic front" is to "broaden the participation in the world of work of segments of the population who have so far been excluded". "These (segments) are concentrated, above all, among young people and women, especially in southern Italy," he said.
Conte told the House that his new government's first budget law will focus on sustainable development and boosting growth.
"Many challenges await us, starting with the next budget, which will have to put the country on the path of solid growth prospects and sustainable development, within an international macroeconomic situation characterised by deep uncertainty," he said.
Conte said that his new government will bring in tax cuts that will benefit workers as well as averting a hike in value added tax that is set to kick in next year unless alternative budget coverage can be found. "Out priority objective is to reduce taxes on labour, the so-called tax wedge, to benefit workers and identify a fair pay level, the so-called minimum wage," he said. He said that there should be a "gradual reshaping of that tax rates to support medium and lower earners". He also stressed that the State should make life difficult for tax evaders, with prison terms for big tax dodgers.
"Everyone should pay tax so everyone can pay less," he said.
He admitted that the challenge of reducing the tax wedge while averting the VAT in the government's next budget will be "demanding".
Conte said that Italy under his new government will be the lead player of a phase of renewal of the European Union.
"On a European level, our action as a government will start together with the establishment of the new Commission, to which our country has contributed in a primary way," Conte said.
"Italy will be the protagonist of a phase of renewal of the Union that aims to build a more supportive, inclusive Europe that is closer to citizens, more aware of environmental sustainability and social and territorial cohesion", the premier told MPs.
Conte also said it is "necessary to improve the Stability and Growth Pact and its implementation to simplify rules, avoid procyclical effects and support investments, starting with those connected to environmental and social sustainability".
"A procyclical budget policy, in fact, risks nullifying the important efforts made on the domestic front to relaunch the country's potential growth, reducing effective growth", the premier said. EU institutions and internal cohesion need to be "strengthened", he went on to say.
Conte added that "on various European issues, I have been working since my previous experience to affirm and claim those sensibilities, still largely present in our country, in favor of a qualitative leap regarding the EU's role".
Conte said it was important to have an impact on ongoing processes, stressing that he is "firmly convinced that it is within the perimeter of the EU, and not outside, that the wellbeing of Italians needs to be south".
Conte also vowed to cut MP numbers from 945 to 600, bring in a new election law, change controversial security and migrant decrees and try to change the EU's stability and growth pact.
Conte also pledged to cut the tax wedge and promised more jobs for young people "who we must try to bring back to Italy", as well as a boost for schools and more nurseries for working mothers, and other moves to help families.
He said there would be a "progressive and inexorable revision" of motorway concessions and more investments in infrastructure - spurring a drop in the stock price of Atalantia, parent of Autostrade per l'Italia, blamed for allegedly skipping maintenance that might have averted the Genoa bridge disaster that killed 43.
On the migrant question, he said Italy would ask Brussels for "rigour and responsibility".