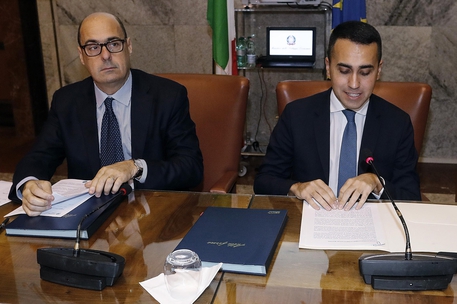 (ANSA) - Rome, August 26 - It is crunch time for talks between Italian political parties aimed at setting up a new government to avert an early general election.
The leaders of the two main current suitors, the anti-establishment 5-Star Movement (M5S) and the centre-left Democratic Party (PD), respectively Luigi Di Maio and Nicola Zingaretti, will meet at the premier's office at six o'clock Monday.
The parties have until seven o'clock Monday evening to give their "indications" to President Sergio Mattarella.
Mattarella said Monday he would start a fresh round of consultations with the parties at four o'clock in the afternoon on Tuesday.
The consultations will last two days, ending with the M5S, the biggest parliamentary force, at 17:00 on Wednesday, Mattarella's office said.
On Tuesday Mattarella will phone his predecessor Giorgio Napolitano, then will receive Senate Speaker Elisabetta Casellati at 16:00, and House Speaker Roberto Fico at 17:00.
Meetings with the parties will follow, first with the smaller ones on Tuesday and following with the larger ones on Wednesday like Brothers of Italy (FdI), Forza Italia (FI), the League and the Democratic Party (PD), before lastly the M5S.
M5S bigwigs went into a huddle Monday afternoon and the PD said it would hold a meeting of its directorate at six o'clock Tuesday evening.
PD Senate Whip Andrea Marcucci said there was no veto on caretaker premier Giuseppe Conte staying on at the helm of a new M5S-PD government.
"There are no vetoes, we're talking about content", said Marcucci.
But PD leader Nicola Zingaretti reiterated earlier that a change is needed in a government team that could be the fruit of any deal between the PD and the M5S.
Zingaretti reiterated his opposition to Conte taking over at the head of a new M5S-PD executive.
"Discontinuity is needed," he said.
Zingaretti also reiterated that he thought that a "turning-point" government was needed marking a clear break from the policies of the previous M5S-League government.
"I am, and I remain, convinced that a government is needed for this country, a turning-point government," he said.
M5S leader Luigi Di Maio's insistence that Conte should get a fresh term as premier has so far blocked a deal.
Zingaretti made it clear the possible new government must mark a "change" from the 14-month M5S-League administration, Italy's first all-populist government.
The stalemate has boosted the chances of President Mattarella calling a fresh election at the end of October.
There is even a chance that the M5S may get back together with the nationalist League amid overtures from League leader Matteo Salvini, who pulled the plug on the government citing M5S inaction August 8.
But Salvini, who is riding high in opinion polls thanks to tough anti-migrant policies, would be the biggest beneficiary from an early election - although his numbers have fallen since he brought down the government.
League Farm Minister Gianmarco Centinaio told ANSA Monday the League was ready to renew its collapsed alliance with the M5S to last the rest of the legislative term until 2023.
"We're not interested in short-term things or things done against someone but in a pact to renew and take forward the government programme," he said.
In his resignation address on August 20 Conte made a blistering attack on Salvini's policies including the hardline anti-migrant stance that has most helped boost his poll ratings - earning the premier plaudits from the left.
One of the conditions the PD has set for a government with the M5S is reversing Salvini's policy of closing Italy's ports to NGO run migrant rescue ships.
One of the key conditions the M5S has set is to cut the number of Italy's MPs and Senators from 945 to 600.
An opinion poll by Demopolis Monday put the League on 33%, down 4% in the last week, and its possible rightwing allies Brothers of Italy on 6.8% and Forza Italia on 6.2%, giving the centre right a clear majority.
The M5S, boosted slightly by the Conte effect, are up from 17% to 19% while the PD is still second party with 23%.