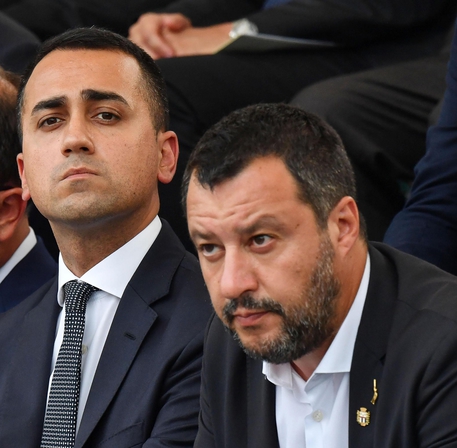 (ANSA) - Rome, August 19 - Matteo Salvini is "unreliable", former partner the 5-Star Movement (M5S) said after the League leader tried to patch things up after pulling the plug on the 14-month M5S-League government.
"Matteo Salvini has become an unreliable interlocutor, without credibility," the M5S said after a party summit at founder Beppe Grillo's beach home Sunday.
Anti-migrant Euroskeptic and nationalist League leader Salvini called time on Italy's first all-populist government on August 8 after a dramatic split in votes on a high-speed rail link with France.
But he appears to have had second thoughts as the possibility of an alternative government between the M5S and the centre-left Democratic Party (PD) has taken shape.
Speaking after the summit with Grillo, political leader Luigi Di Maio and other M5S bigwigs, the M5S said Salvini was now trying a "shameful U-turn".
Salvini reacted by repeating that an M5S-PD government would a "swindle".
He said "if there is no government then the only way forward is elections".
"Otherwise we sit down at the table and start work again".
The next formal step in the government crisis is Premier Giuseppe Conte's address to the Senate Tuesday, after which he may go to President Sergio Mattarella and resign rather than facing a League no confidence motion, which may not now be filed. Meanwhile two-time former centre-left premier Romano Prodi, a PD grandee, called for a "long-lasting coalition government" possibly also including Silvio Berlusconi's centre-right Forza Italia (FI) party.
The PD, for its part, was split between those in favour of teaming up with the M5S, like former leader and ex-premier Matteo Renzi, those staunchly against it like former industry minister Carlo Calenda, and those who are waiting to see how Mattarella decides to move forward, like leader Nicola Zingaretti.