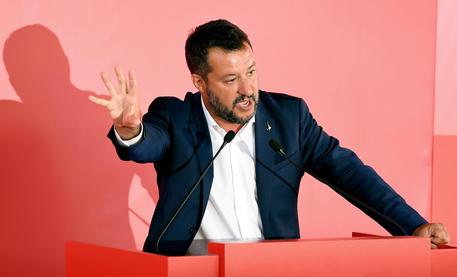 (ANSA) - Rome, August 6 - Deputy Premier and Interior Minister Matteo Salvini's controversial new security decree won final approval on Monday after passing the test of a confidence vote in the Senate.
In the end the package prevailed with ease, with 160 votes in favour, 57 against and 21 abstentions.
Ex-premier Silvio Berlusconi's opposition centre-right Forza Italia did not take part in the vote while the right-wing Brothers of Italy (FdI) party abstained.
So it made no difference that five Senators for the 5-Star Movement (M5S), the coalition partner of Salvini's League, snubbed the vote.
The aim of the legislation is to build on the security-and-migrantion decree that was approved last year and was also drafted Salvini, who has spearheaded the government's tough stance of denying NGO-run migrant-rescue ships access to Italian ports. Among other things, the new decree sees the commanders of ships who rescue people at sea and take them into Italian waters without permission face fines of up to one million euros and the impoundment of the vessel. Critics have said it could undermine the human rights of asylum seekers and the victims of torture. The United Nations and the Council of Europe have expressed reservations about the decree.
After the vote, Salvini thanked the Italian people and "the blessed Virgin Mary". He added that it was not a victory for his League party but "a step forward towards a more secure Italy".