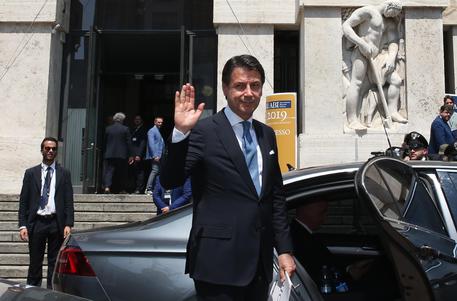 (ANSA) - Naples, July 14 - Premier Giuseppe Conte said Sunday that his government was not in danger of collapsing over suspicions a person close to the League party discussed taking funding via oil kickbacks from Russia.
Milan prosecutors opened a probe after reports that Lombardy-Russia Association President Paolo Savoini met with two other Italians and three Russian in a Moscow hotel to discuss siphoning off an alleged 65 million euros from oil profits.
Savoini was also present at two bilateral meetings involving Russian President Vladimir Putin.
"I'd say no," Conte replied when asked if his government was at risk over the case ahead of the closing ceremony of the 2019 Universaide in Naples. "Mr Savoini has never had a government position.
"So this investigation only regards him at the moment.
"It would seem to be a mistaken observation to me to say that it could put the government at risk," added Conte, who at the weekend issued a statement that contradicted elements of Deputy Premier Matteo Salvini's version regarding Savoini's presence at the bilateral meetings.
"I clarified things and I think I was very clear. I'll let the judiciary investigate".
Interior Minister and League leader Salvini said his party has not taken a rouble off the Russians and described the case as "ridiculous".