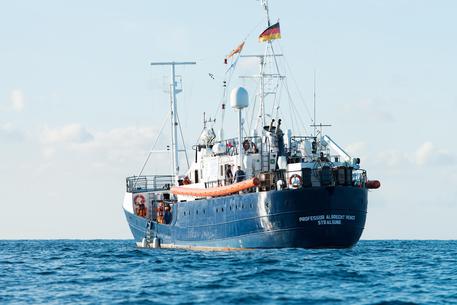 (ANSA) - Rome, June 14 - Deputy Premier and Interior Minister Matteo Salvini on Friday launched a fresh attack on the Sea-Watch NGO after it refused to take 52 migrants it rescued off Libya this week to Tripoli. The Sea Watch 3 ship, which is close to the Italian island of Lampedusa, at one stage seemed to have turned towards Malta, but Salvini said it is not going there. "No Malta," the League leader said via Twitter. "The #SeaWatch NGO ship has changed route again: it is swaying in the Mediterranean playing a game on the backs of the immigrants, even though it asked for a port and obtained it in Tripoli". Sea-Watch has said Tripoli is not a port of safety. "Forcibly taking rescued people back to a war-torn country, having them imprisoned and tortured, is a crime," the German NGO said.
Sea-Watch has on several occasions sought to challenge Salvini's policy of closing Italy's ports to NGO-run search-and-rescue ships. The government, meanwhile, has just passed a new decree that would see NGO ships that bring migrants rescued at sea to Italy without permission fined up to 50,000 euros.
"We are witnessing the umpteenth show," Salvini said.
"They say they are good, but they are kidnapping women and children in the middle of the sea.
"#closedports for them!".