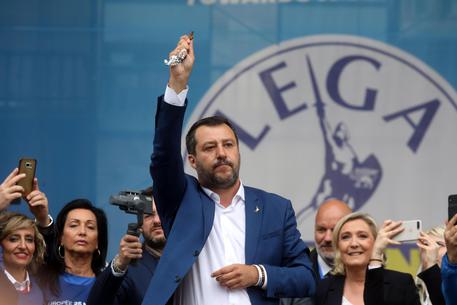 (ANSA) - Rome, May 20 - Deputy Premier and Interior Minister Matteo Salvini on Monday said he would like to meet the pope.
"I would like to be received by the pope but I have never asked for it", Salvini, the leader of the Euroskeptic, anti-immigration League, told private broadcaster La 7.
"He is one of the most stimulating and fascinating people - I could only learn" from him, he added.
"If the occasion will arise, I will be more than willing to meet him", Salvini went on to say. He said welcoming migrants "is a 'duty within the limits of the possible', according to the catechism of the Catholic church - the possible has been surpassed".
"Many Catholics vote for the League, many vote for other" parties, he added, responding to a question.
The interview followed Salvini's controversial speech at a rally in Milan on Saturday during which he brandished a rosary.
Leading members of the Catholic church criticized the move with Vatican Secretary of State Pietro Parolin warning that "invoking God for ourselves is always dangerous".
Father Antonio Spataro, the director of magazine Civiltà Cattolica, wrote on Facebook that "Christians should be angered by rosaries in politics".