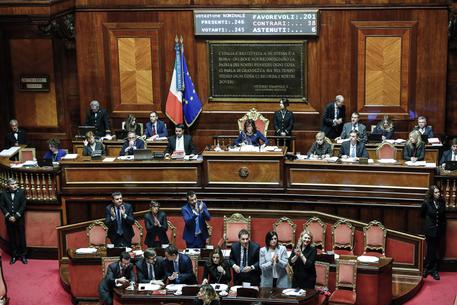 (ANSA) - Rome, March 28 - The Senate on Thursday gave final approval to the government's law expanding the right to legitimate self defence. It was approved by the Upper House on its third reading with 201 votes in favour, 38 against and six abstentions.
The lawmakers from the parties supporting Premier Giuseppe Conte's government, the League and the 5-Star Movement (M5S), applauded as the legislation got the definitive green light. The bill expanding the right to self-defence from intruders, fashioned by Interior Minister and League leader Matteo Salvini, introduces norms similar to US 'stand your ground' laws.
"This is a great day for Italians," said Salvini, who recently courted controversy by visiting in jail a businessman who made a would-be thief kneel and shot and injured him in the chest.
"After years of chatter and polemics we have enshrined the sacrosanct right of legitimate self defence for those who are attacked in their homes, in their bars, and in their restaurants," he said.
"The Wild West is not being legitimised, but we are on the side of decent and respectable citizens".
Salvini has long campaigned for a law allowing self-defence in all cases and has repeatedly sided with business people and other citizens who have been prosecuted for excessive self defence under the previous law.
But the new law may face legal hurdles, according to magistrates union ANM.
"There are numerous doubts that the law may be unconstitutional in many aspects," ANM President Francesco Minisci told reporters.
He also said the change in legislation was not needed, in his view.
"The new law...will not safeguard citizens any more than they were safeguarded up till today; on the contrary is introduces concepts that have little to do with law, it foresees dangerous automatism and restricts the range of evaluation by magistrates, as well as bringing with it great difficulties in interpretation," he said.
Among the new factors to be weighed in self-defence cases there is the concept of "serious emotional disturbance" in the face of intruders, which would legitimise even deadly self defence.