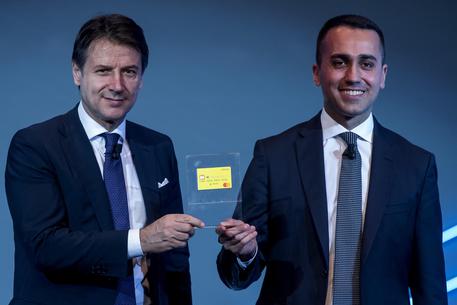 (ANSA) - Rome, February 4 - Deputy Premier Luigi Di Maio on Monday presented the first of three million cards for getting the government's new basic income and said "the State has become a friend of citizens once again" after the "pro-austerity blows".
Premier Giuseppe Conte expressed pride on Monday as the government presented the website and card design for its 'citizenship wage' basic income programme.
"We are all proud, the whole government is, but the important thing is that the Italian people are proud," Conte said. "It is a highly complex measure of social fairness that is the result of a team effort. We worked hard to produce this measure.
"While we studied a great deal to create this reform, others will now study our reform". The card is yellow and looks similar to a post office cash card but doesn't have a name printed on it. Deputy Premier Luigi Di Maio said the basic income will "allow the economy to grow because the money will be spent at merchants and businesses throughout the country". It is aimed at the poorest families and job seekers, who will be offered three jobs before losing the right to the 'citizenship wage'. It will be possible to apply from March 6.