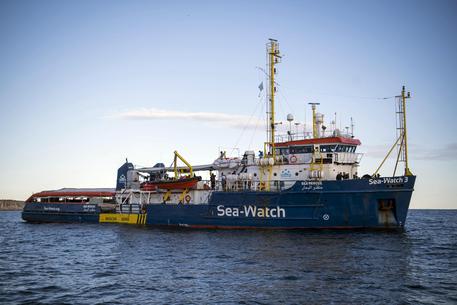 (ANSA) - Rome, January 25 - Deputy Premier and Interior Minister Matteo Salvini said Friday that Rome has sent a letter to the government of the Netherlands telling it to take charge of the case of a ship run by the Sea-Watch NGO with 47 rescued asylum seekers aboard.
The vessel has been allowed to enter Italian territorial waters due to bad weather, Italian coast guard sources said Friday.
"Fifteen minutes ago I sent a letter to the Dutch government in which the it is officially and formally tasked with dealing with this vessel, which flies the Dutch flag, and of the passengers on board," Salvini said. Earlier on Friday fellow Deputy Premier and Labour and Industry Minister Luigi Di Maio said that he thinks the Dutch ambassador to Italy should be summoned over the ship.
The city of Naples has said it is willing to allow the Sea-Watch ship to dock there.
But League party leader Salvini ruled this out, saying his policy of refusing access to Italy's ports to NGO-run migrant-rescue ships is not changing. I can't wait to have them arrive, safe and sound, in another European country," Salvini said. "There's no space (for them) in Italy".