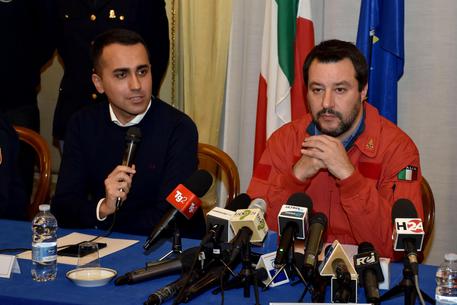 (ANSA) - Rome, January 11 - Differences on the high-speed rail (TAV) link between Turin and Lyon and a delay to a decree on a basic income and pension reform have kept government tensions running despite a reluctant agreement on rescue migrants.
The cost-benefit analysis that the government has commissioned on the controversial TAV link is set to be negative, government sources said on Thursday.
Premier Giuseppe Conte's 5-Star Movement-League executive has said the analysis will influence its decision over whether to press ahead with the project, which has come under fire over its cost and environmental impact.
The sources said that so far only a "preliminary draft" of the analysis had been handed to the government and stressed that no decision has been taken. Deputy Premier and Interior Minister Matteo Salvini reproposed the idea of holding a referendum on the project if the analysis gives it the thumbs down.
"I'm in favour of new roads and railways," League leader Salvini told RTL radio.
"I'm in favour of the TAV and the project being continued.
"If the technical analysis of the TAV were negative, none of us would want to, nor would be able to, stop the request for a referendum".
Fellow Deputy Premier and Labour and Industry Minister Luigi Di Maio reiterated that his 5-Star Movement "is against the project".
"I haven't read it. It's a preliminary study," he told Radio Anch'io, referring to the cost-benefit analysis. "Let's wait for the official data. The experts will have to talk and say where the project is a good investment".
Meanwhile the examination of the decree for the government's 'quota 100' pension reform and its 'citizenship wage' basic income was put off amid the government tension.
The decree is likely to be examined next week, sources said.
The pension reform, amending an unpopular 2011 reform that raised the retirement age to 67, is the League's pet policy promise while the basic income is the flagship campaign pledge of the M5S. Meanwhile Deputy Premiers Di Maio and Salvini both played down talk of turmoil within the government on Thursday following tension about Italy's decision to take some of the 49 migrants who had been at sea for weeks after being rescued by NGO-run ships in the Mediterranean. League leader and Interior Minister Salvini, who has spearheaded a tough stance that has seen NGO-run migrant-rescue ships denied access to Italy's ports, had said he was against receiving any of the asylum seekers. But at a meeting of senior figures with Premier Giuseppe Conte late on Wednesday, the executive reached an agreement for Italy to be among eight European countries to take a share of the migrants.
Around 10 of the people who were finally allowed to disembark in Malta on Wednesday will come to Italy and they will be entrusted to the care of the Waldensian Church at no cost to the State. 5-Star Movement (M5S) leader Di Maio said Wednesday's meeting was "very cordial".
"You always find a solution with Giuseppe and Matteo," he told Radio Anch'io.
Salvini also said the government was not in crisis.
"I don't leave anything half done and I don't want to cause any government to collapse," Salvini told RTL radio. "The government is fine. We have done a lot in six months and the two government parties have the confidence of 60% of the Italian people, which is pretty unique".