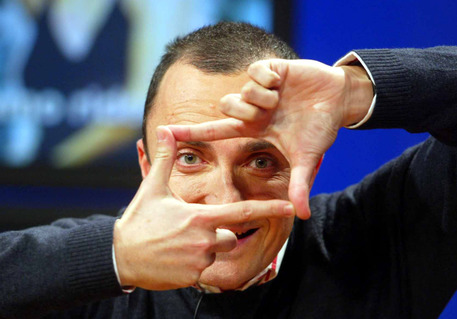 (ANSA) - Rome, January 3 - The newly appointed head of Raidue, Carlo Freccero, on Thursday said he wanted to bring back to the airwaves a comic who was among those banned by then premier Silvio Berlusconi for allegedly biased interference in the 2001 general election.
Potty-mouthed comedian and satirist Daniele Luttazzi has not worked on State broadcaster RAI since the so-called 'Bulgarian edict', issued in 2002 while media magnate turned politician Berlusconi was in Sofia.
Two other highly popular TV figures, the late veteran journalist and presenter Enzo Biagi and presenter and journalist Michele Santoro, disappeared from RAI's airwaves along with Luttazzi after being criticised by Berlusconi on his Bulgarian visit.
The billionaire media magnate, who owns Italy's private TV network Mediaset, accused the trio of having slashed his May 2001 election lead by making "criminal" use of state TV.
Biagi was criticised in particular for interviewing left-wing comic and Oscar-winning filmmaker and actor Roberto Benigni on the eve of the elections.
Biagi, Santoro and Luttazzi, who was deemed guilty of interviewing waspish Berlusconi critic and journalist Marco Travaglio, were dropped by RAI not long after Berlusconi's complaint.
On Luttazzi's Satyricon show, Travaglio presented his book The Smell of Money allegedly detailing the allegedly illicit provenance of the magnate's first seed money to start the construction empire that bankrolled his entry into commercial TV. Luttazzi and Travaglio were sued for 10 million euros by Berlusconi, and were acquitted in 2015.
The three cases led to allegations of censorship at the broadcaster under Berlusconi's government, accusations which were heatedly denied by RAI management.
Biagi and Santoro returned to the broadcaster in 2006 but Luttazzi has not been seen on terrestrial TV since, although he has worked with Sky.