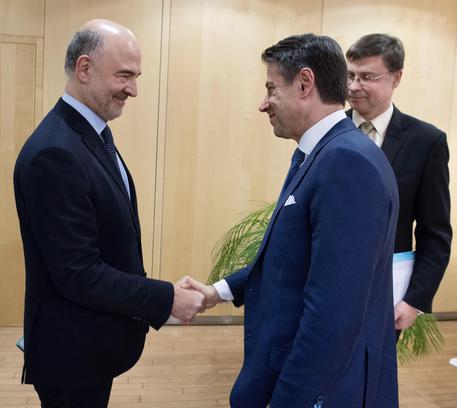 (ANSA) - Brussels, December 19 - The European Commission said Wednesday that it has decided not to open an infringement procedure against Italy for excessive debt.
The announcement came after European Commissioners examined a "technical" agreement reached between Rome and Brussels late on Tuesday on Italy's budget for 2019. The Commission had rejected the government's initial draft budget plan, which saw Italy running a deficit of 2.4% of GDP next year to finance key pledges and boost sluggish growth, saying it breached EU rules. Premier Giuseppe Conte's League-5-Star Movement (M5S) government proposed bring the deficit down to 2.04% to stop the EU opening an infringement procedure. European Commission Vice President Valdis Dombrovskis said Wednesday that the agreement Brussels had reached with Rome over Italy's 2019 budget was not perfect. "The solution on the table is not ideal," he said. "It does not provide long-term solutions to the Italian economy's problems, but it enables us, for now, to avoid opening a debt procedure, as long as the negotiated measures are fully applied".
The government had said it is not willing to drop its two key pledges, the 'citizenship wage' basic income for job seekers and the 'quota 100' pension reform that will bring down the retirement age for many people. European Economic Affairs Commissioner Pierre Moscovici hailed the agreement as "a victory of political dialogue". He said the Commission had preferred to adopt the path of negotiation rather than "confrontation". He said that under the agreed solution, Italy's structural deficit will be no worse than previously, compared to a deterioration of 0.8% under the government's initial budget plan. Conte is set to report to the Senate after the breakthrough.