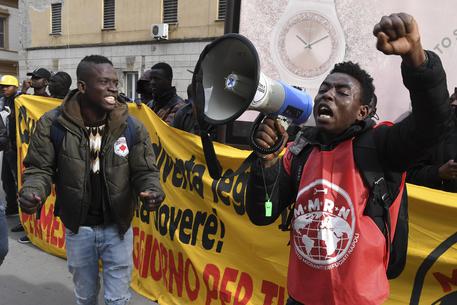 (ANSA) - Rome, December 10 - Amnesty International criticised Italy for its treatment of asylum seekers in a report released on the 70th anniversary of the Universal Declaration of Human Rights on Monday. The report lamented the "erosion of the human rights of asylum seekers" following the approval of the government's security-and-migration decree.
It also complained about the "xenophobic rhetoric of the political world".
It said that Premier Giuseppe Conte's government had "immediately distinguished itself for repressive management of the migratory phenomenon".
"The authorities have hampered and continue to hamper the landing in Italy of hundreds of people saved at sea, inflicting further suffering on them and undermining the overall functioning on the system of maritime search and rescue," it said. Interior Minister and Deputy Premier Matteo Salvini, who has spearheaded the government's tough stance that has seen NGO ships with rescued migrants denied access to Italian ports, said he was not concerned about the report.
"Drug-dealers, mafiosi, delinquents and illegal immigrants do not have asylum in my country," he said. "My conscience is clean and I'm going to keep going".