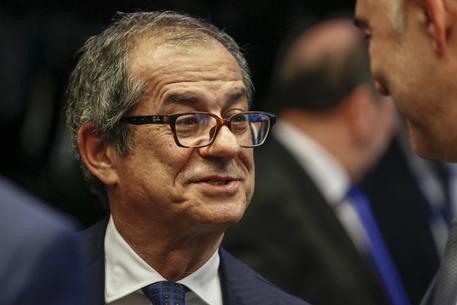 (ANSA) - Luxembourg, October 1 - Economy Minister Giovanni Tria said Monday that the European Union should not worry about Italy's commitment to bringing down its big public debt after the government said last week it intends to let the deficit rise to 2.4% of GDP. "Now I'll try to explain what is happening and how the budget is formulated," Tria told reporters on the way into a Eurogroup meeting, adding that Italy's European partners should be "tranquil".
"The debt-to-GDP ratio will come down (in 2019)," he said.
European Commission Vice President for the Euro Valdis Dombrovskis, however, said that "at first sight" Italy's budget plans "do not appear compatible with the rules of the (Stability and Growth) Pact". The planned budget sets a 2.4% deficit to GDP ratio for the next three years, up from a previous target of 0.8% for next year. "For the moment what I know is that the deficit of 2.4% not only for next year but for three years, represents a very, very significant deviation with respect to agreements made" by Italy, European Economic Affairs Commissioner Pierre Moscovici told reporters on his way into the Eurogroup meeting. French Economy Minister Bruno Le Maire also expressed concern, even though Paris is set to have an even bigger deficit. "The rules are there and they are the same for everyone because the futures (of the eurozone countries) are linked," Le Maire said. "We are reducing our debt, respecting the rules, and we are under the 3% (deficit-to-GDP threshold) to satisfy the European Commission because we believe reducing public debt and introducing reforms is good for the French people". Italian Foreign Minister Enzo Moavero, on the other hand, stressed that it was necessary to stimulate economic growth to make it possible to bring down Italy's public debt of over two trillion euros. "The burden of public debt that Italy has been carrying for years should be reduced," Moavero said at the presentation of a report by construction association ANCE at the foreign ministry in Rome. "We must do this out of respect for the new generations.
"Italy must grow and improve its gross domestic product to reduce it". Premier Giuseppe Conte said Monday that his government's budget plans will foster growth while keeping the State accounts in order.
"We have laid down the foundation for a serious, courageous budget, which looks towards growth within a framework of stability in the public accounts," Conte said on Facebook. "(It is) a budget that aims to offer responses to widespread poverty, to pensioners, to families, to savers harmed by the bank crises, which does not take one euro away from social services or health. "A budget that starts to lower taxes and sets its sights on the biggest investment plan in the history of the Italian republic.
"A budget that will be a turning point for the revival of the country and for social development".
The Milan bourse shed 0.50% and the Italian-German 10-year bond spread rose to 275 points after the EU officials took a dim view of Italy's budget plans Monday.
Deputy Premier Luigi Di Maio, leader of the anti-establishment 5-Star Movement (M5S) said "there are some European institutions which, with their statements, are playing at terrorism on the markets".
Di Maio, who is also labour and industry minister, said "someone this morning didn't like the fact that the spread had not rocketed. "Moscovici, who isn't Italian, woke up and decided to make a statement against Italy, against the Italian (economic blueprint) DEF, and create tension on the markets".
Di Maio added that "Luckily the bourse is about to close.
From tomorrow we will continue to explain that 2.4% is a measure very far off what others did." He said "it's only that if the M5S and the League does it it's not OK".
Di Maio stressed "there's no reason to call into question" the planned 2.4% budget deficit-to-GDP ratio for the next three years contained in Italy's budget plan.
"We're all convinced, the government is united," he said.