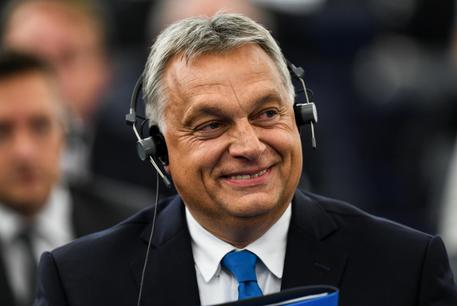 (ANSA) - Strasbourg, September 11 - Hungarian Premier Viktor Orban on Tuesday praised the Italian government for its tough stance on migrants.
"I am willing to cooperate with any government that wants to defend the frontiers," Orban told the European Parliament ahead of a vote on a motion to start the so-called Article 7 procedure against Hungary over alleged violations of the rule of law. "It is not a factional issue for me.
"I take off my hat to the Italians for the courage they are having, and they have had, for what they have done". Orban added that he was fully behind Italian Interior Minister and Deputy Premier Matteo Salvini, who has spearheaded Rome's tough stance. "My relationship with Salvini is not of a party-political nature," Orban told a press conference.
"We cooperate at the government level.
"Salvini is the interior minister and he is very decisive and determined to the protect the frontiers.
"I support him 100%".
Salvini said Tuesday that the MEPs of his League party will vote against the Hungarian motion.
"We'll vote in defence of Orban," Salvini said. "The European Parliament cannot put peoples and elected governments on trial".