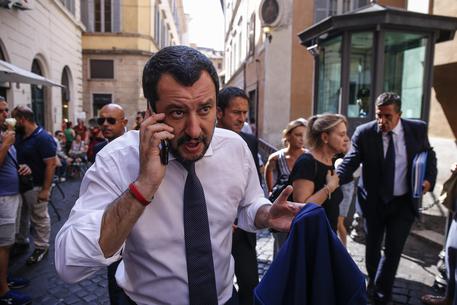 (ANSA) - Rome, July 27 - Interior Minister and Deputy Premier Matteo Salvini said Friday that he thinks the TAV Turin-Lyon high-speed rail link should go ahead following media reports that Premier Giuseppe Conte has decided to scrap the controversial project. The premier's office played down the reports that Conte had decided to meet demands from the 5-Star Movement (TAV) to bin the TAV, saying assessments are still being made and nothing had been decided. "It is necessary to go ahead with the TAV, not go back," said Salvini, the leader of the League, the M5S's partner in the coalition government.
"A cost-benefit analysis should be done - is the project necessary or not? Would it cost more to stop it or continue?". The M5S, led by Labour and Industry Minister Luigi Di Maio, has long campaigned for the TAV to be halted due to its cost and environmental impact.
Earlier this week Transport Minister Danilo Toninelli described the TAV as a "huge waste of public money" and said that "no one should dare to sign off on advancing the line" which is being built north of Turin amid constant protests.
On Friday the premier's office said that "the dossier is in the investigation stage with the competent Minister Toninelli, who is engaged in a cost-benefit evaluation that will be put to, and shared with, the premier and the whole government. The solution will be in line with the content of the government contract".
It is estimated that around 1.5 billion euros has been spent on the TAV and that it would cost some two billion more to pull out.
Furthermore, halting the project would require a complicated procedure to rescind an international treaty.
The French TAV committee said that there was "confusion in Italy" and pointed out that, if the project is halted, "the Italians will have to reimburse lots and lots of money.
A European Commission spokesperson said that "the Lyon-Turin (line) is an important project not just for France and Italy, but for the whole of Europe, and it is important that all the parties maintain the commitments to complete it on time".