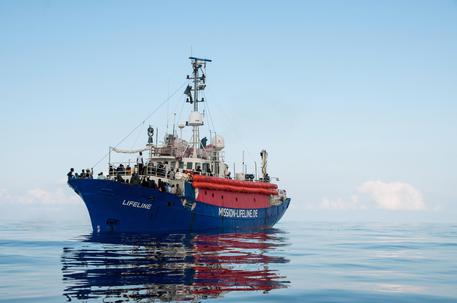 (ANSA) - Rome, June 22 - The German NGO Mission Lifeline fought off attacks by the Italian authorities on Friday, insisting its ship carrying 224 migrants rescued off the Libyan coast is operating in full compliance with international law. "Right now we are half way between Libya and Malta, the situation is calm, the migrants on board have been given blankets and food and received medical assistance from our doctors and nurses," spokesperson Axel Steier told Radio Capital in response to calls from Italy's Interior Minister Matteo Salvini for the crew to be arrested, accusing them of being "pirates". "There is no one with serious injuries. We hope the situation is resolved soon," Steier added in reference to uncertainty over where the ship will dock.
The boat found itself at the centres of new controversy on Thursday after Transport Minister Danilo Toninelli accused it of "operating in Libyan waters outside all rules, outside international law" amid confusion over where the ship was actually registered.
On Thursday the Netherlands denied reports that the Lifeline and another NGO-run migrant-rescue ship, the Seefuchs, are sailing under Dutch flags.
"The Seefuchs and Lifeline are not sailing under Dutch flag as per UNCLOS (United Nations Convention on the Law of the Sea) flag state responsibility," the Netherlands representation at the EU said via Twitter.
However on Friday Mission Lifeline confirmed in a tweet that its ship has been registered in the Netherlands since September 2017, attaching a photograph of the registration document to show it. It also said Thursday's rescue operation took place in international waters.
Meanwhile Salvini said for "the safety of the crew and passengers" Italy had asked Malta to open its ports. "It is clear that the ship will then have to be impounded and the crew members arrested. No more trafficking by sea," he added. However, La Valletta immediately denied having received a formal request from Italy to allow the ship to dock. Salvini has spearheaded the tough stance on migrants and NGOs operating humanitarian missions in the Mediterranean of the new League/5-Star Movement (M5S) government that saw migrant-rescue ship Aquarius, which is run by another NGO, have to travel to Valencia last week after it was denied permission to dock in an Italian port.