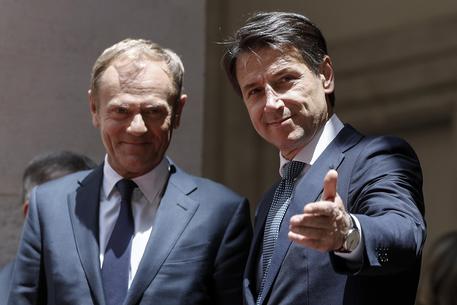 (ANSA) - Rome, June 20 - Premier Giuseppe Conte told European Council President Donald Tusk on Wednesday that it was "unthinkable" for Italy to also have to take migrants that have made secondary movements, given that it is widely recognised as being the country most exposed to migrant flows, government sources said. Conte and Tusk had talks for around two hours at the premier's office in Rome. Secondary movement regards moves from the country in which a migrant first arrived. According to the Dublin Regulation, if an asylum seeker whose request has not been completed leaves the first country they arrived in and go to another EU member State, the latter can relocate them back in the country where they landed. During the talks, Conte said Italy was unwilling to accept the "second reception" of asylum seekers in this way, the sources said. This will be the position Italy expounds at Sunday's informal meeting of the leaders of eight EU countries, including Germany and France, ahead of next week's European Council summit.