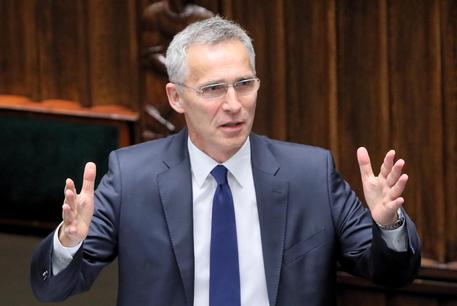 (ANSA) - Brussels, June 6 - NATO Secretary-General Jens Stoltenberg said Wednesday on the new Italian government's overtures to Russia and vow to work to revise sanctions that "we must maintain political dialogue with Russia but the economic sanctions are important". Stoltenberg said "congratulations to the new Italian Premier Giuseppe Conte, I look forward to working with him, I will meet him soon".
He said he was happy about "Italy's commitment to NATO confirmed by Conte", since "Italy is an important ally" for the Alliance.
Sanctions on Russia will remain until Moscow changes its policies, US Ambassador to NATO Kay Bailey Hutchinson told journalists Wednesday. "Italy is one of our strongest allies", she said, "but we believe that the sanctions must be maintained on Russia until Moscow changes its behaviour". She said "it is important that our allies should remain solid on this position" about maintaining sanctions "at least until Russia changes its stance, because otherwise it would be a very bad signal to send to Moscow".