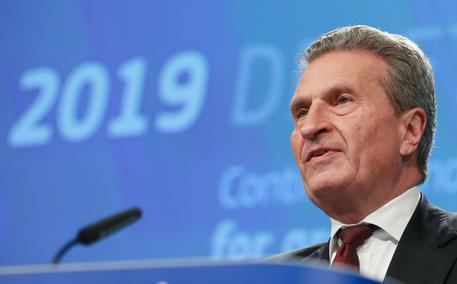 (ANSA) - Rome, May 29 - The anti-establishment 5-Star Movement (M5S) and the anti-migrant Euroskeptic League on Tuesday blasted European Budget Commissioner Guenther Oettinger for saying markets would persuade Italians not to vote forb the two populist parties.
M5S) European Parliament delegation head Laura Agea said "we ask European Commission President Jean-Claude Juncker to immediately deny Commissioner Oettinger.
She said "his words are of an unprecedented gravity and are proof of the clear manipulations that Italian democracy has suffered in the last few days".
League leader Matteo Salvini said: "They are without shame in Brussels. "The European budget commissioner, Germany's (Guenther) Oettinger, says that 'the markets will teach Italians to vote for the right thing'. If that isn't a threat...I'm not scared #Italiansfirst".
Fallout on the financial markets will prompt Italians not to vote for populist parties, Oettinger of Germany said Tuesday, according to an excerpt from a Deutsche Welle interview to be published tonight. "The negative development of the markets will lead Italians not to vote much longer for the populists," he reportedly said. Two populist parties, the 5-Star Movement (M5S) and the League, came out on top in the March 4 general election and are set to score even heavier in the next elections, expected in September or October.