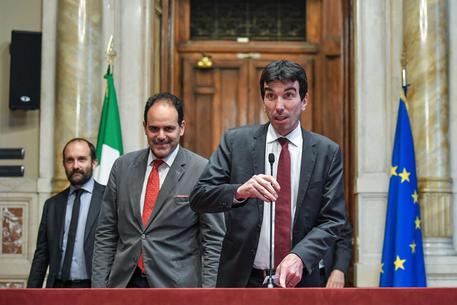 (see related) (ANSA) - Rome, May 27 - The centre-left Democratic Party (PD) on Sunday backed President Sergio Matterella after his controversial rejection the nomination of Paolo Savona as economy minister.
"The League and the 5-Star Movement are using unheard of words and unprecedented threats," caretaker PD leader Maurizio Martina said via Twitter.
"We are ready to mobilize to defend democracy and our institutions. "I invite (M5S leader Luigi) Di Maio and (League leader Matteo) Salvini to measure their works - their attacks on the head of State and the institutions are unheard of," he added in an interview with a RAI TV show.
"The president has been a guarantor of the Italian people and he has our thanks". Outgoing Premier Paolo Gentiloni also expressed his support for Mattarella. "Steady nerves and solidarity for President Mattarella," Gentiloni said via Twitter after premier designate Giuseppe Conte dropped his bid to form a 5-Star Movement/League government following President Mattarella's rejection of Savona.
"Now we have to save our great country".
Ex-premier and former PD leader Matteo Renzi said the attacks on Mattarella were "shameful". "Salvini did not want to govern: he made unachievable promises, he is afraid of his lies," Renzi, who quit as PD leader after its poor showing in the March general election, said via Twitter.
"And so he used the alibi of a minister to cause everything to collapse - old-style League. "But threatening #Mattarella is shameful. You don't mess about with the institutions".