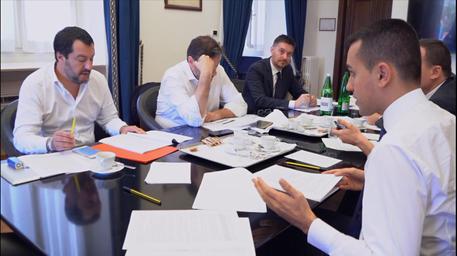 (ANSA) - Rome, May 18 - The anti-establishment 5-Star Movement (M5S) on Friday started an online vote of members about the government contract it has agreed with the League. The poll started at 10:00 and will run until 20:00, the M5S's blog said.
The anti-migrant, Euroskeptic League will also consult its supporters about the programme via voting at stands throughout the country at the weekend. The contract for the M5S-League government features plans to introduce a two-tier flat tax, a basic income and the revision of a 2011 pension reform that raised the retirement age, among other measures.
Experts have estimated that the measures in the programme could cost over 100 billion euros.
Critics have said the programme does not give sufficient information about the financial coverage for these measures. "If you decide that its the right road to take, despite what all the big Italian and foreign newspapers say, despite (the opinion) of some Brussels bureaucrats, despite the spread, then as the political head of the 5-Star Movement I will sign the contract to finally launch the government of change," M5S leader Luigi Di Maio said on the M5S blog as he launched an online vote. League chief Matteo Salvini and Di Maio have not yet agree who will be the premier of the new government.
Salvini said Thursday that it will be neither him nor Di Maio.