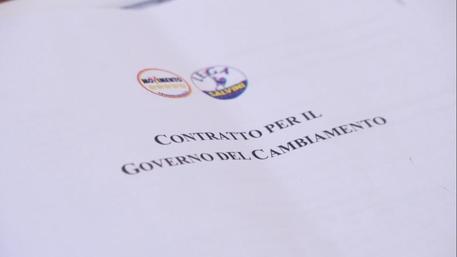 (ANSA) - Rome, May 17 - The following are key points in the prospective government 'contract for a government of change' between the anti-establishment 5-Star Movement and the anti-migrant, Euroskeptic League: - BASIC INCOME This would give 780 euros a month to poor families and job seekers, who to qualify will have to actively seek work and will be disqualified if they turn down three straight job offers. It enjoys massive support in Italy's impoverished south, which the M5S swept in the March 4 general election. The M5S has said it will only be brought in after a multi-billion-euro revamp of Italy's highly inefficient job centres.
- FLAT TAX There would be two rates, 15% for low-to-middle income earners and 20% for higher earners. The aim is to stimulate the economy while cutting tax evasion. It enjoys huge support in the wealthier north of Italy where the League, formerly the Northern League, earned most of its votes.
- FORNERO REFORM The government would revise an unpopular 2011 pension reform named after then labour minister Elsa Fornero, which raised the pension age to 67. It would aim to bring the retirement age down to 64, on the so-called 100 formula (age plus years of contributions) and increase the categories of 'heavy' work that will be allowed further cuts. - REVISION OF EU TREATIES The government would try to revise European Union fiscal rules (the Fiscal Compact) and 'bring back sovereignty' to Italy, but will stop short of trying to take Italy out of the eurozone.
- NO VAX Eleven vaccines which are currently mandatory would be recommended, but no longer obligatory. This would go some way towards meeting demands from the so-called No Vax movement.
- NO TAV The government would stop a high-speed rail (TAV) line between Turin and Lyon in France, currently being built north of Turin, meeting demands from the NO TAV movement. This has been a long-time M5S vow. The penalty would be two billion euros. - BONDS BOUGHT BACK BY ECB EXEMPTED FROM EU TALLIES Government bonds bought back by the European Central Bank would be exempted from national-debt calculations.
- EASIER DEPORTATION OF MIGRANTS The procedures to deport illegal migrants would be made easier. The campaign pledge to repatriate 600,000 undocumented migrants currently in Italy no longer appears. Rules of engagement in the Mediterranean to be changed, and Dublin Regulation revised. Mosque sermons may be ordered to be in Italian.
- LAW AND ORDER Self-defence against robbers and assailants will always be legitimate. Jail time will be increased for serious offenders, and tax dodgers will go to jail. Undercover cops will be used, especially for corruption. The statute of limitations will be lengthened after recent cuts. Civil law procedures to be reformed and courts boosted to end current 'snail-paced' justice. Roma camps to be cleared.
- PUBLIC WORKS The government will launch an ambitious public-works programme to help lift the economy and create jobs.
- CONFLICT OF INTEREST The government will introduce stiff norms on conflicts of interest, which are currently unregulated in Italy. - INTERNATIONAL RELATIONS, TREATIES The government recommits to NATO but wants to lift sanctions on Russia which is to be considered a partner rather than a rival or antagonist.
- 'CONCILIATION COMMITTEE' When major policy problems arise or key decisions split the government, a so-called 'conciliation committee' formed by the premier and party officials will resolve the disputes. Critics have likened this to the Supreme Soviet or Fascism's Grand Council but the M5S and League say it is a novel way to avert political crises. The contract will be put to M5S voters on their online platform, Rousseau, and to League voters at gazebos, both over the weekend.
President Sergio Mattarella has said he will not be a "mere notary" and will have his say on policies that run counter to Italy's international commitments and the Italian Constitution.
Cost-wise, the flat tax, basic income and Fornero reform will alone cost over 100 billion euros, according to estimates by some experts. That would be the equivalent of three average-sized budgets.
The M5S and League say they will pay for it by a higher tax take and a stiffer fight on tax evasion, among other things - while ruling out a wealth tax.