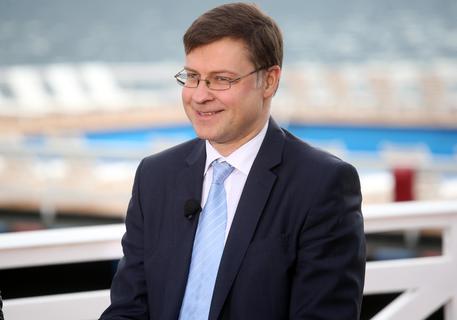 (see related stories on effort by M5S, League to form a new government).
(ANSA) - Brussels, May 15 - Italy must continue to respect its commitments to the European Union, including pledges to cut its big public debt, regardless of who takes over the helm of the new government in Rome, European Commission Vice President Valdis Dombrovskis has said. Asked about Italy during an interview with Politico, Dombrovskis said the Commission would recommend next week that Italy reduces its deficit and its debt, adding this was an "approach" that it would maintain "independently of the government that will come".
"(Italian President Sergio) Mattarella himself stressed the need to maintain European commitments during the government-formation process," he said.
"It is clear that the approach to the formation of the new government and the approach with respect to financial stability must be that of the current path, gradually reducing the deficit and gradually reducing the public debt".
The anti-migrant, Euroskeptic League and the anti-establishment 5-Star Movement are currently in talks to form a new government in Rome.
During the election campaign, both parties failed to rule out breaching the EU's deficit limits.