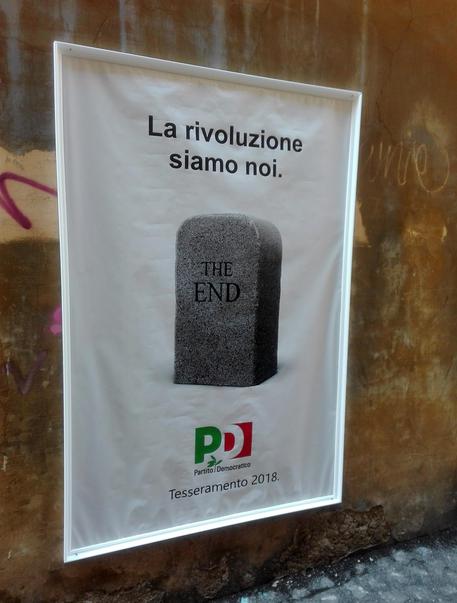 (ANSA) - Rome, May 10 - A fresh piece of street art in Rome Thursday showed a headstone declaring "the end" of the centre-left Democratic Party (PD), which is licking its wounds after a March general election debacle.
The mural in Via del Babbuccio near the Trevi Fountain also said "we are the revolution" and claimed to testify to all-time low PD membership in 2018.
It is the fifth piece of election-related art found in Rome since March 4.
The first showed a kiss between prospective government partners, the anti-establishment 5-Star Movement (M5S) leader Luigi Di Maio and anti-migrant Euroskeptic League leader Matteo Salvini.
The second showed far-right 'sovereignist' Brothers of Italy leader Giorgia Meloni holding an African baby.
The first and second murals were both discovered on March 23.
The third piece was a version of Caravaggio's Cardsharps showing Di Maio, Salvini and centre-right Forza Italia (FI) leader Silvio Berlusconi, near the presidential palace on April 13.
The fourth mural was discovered on May 3.
Inspired by Raphael's Fire in the Borgo, it showed PD ex-leader Matteo Renzi carrying Berlusconi to safety while the PD headquarters burns down It was painted near the PD's HQ in Via del Nazareno.