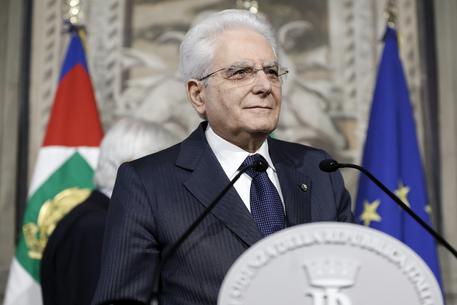 (ANSA) - Rome, April 13 - President Sergio Mattarella said Friday that the second round of government-formation consultations showed that the parties have not made progress towards the creation of a new executive. The head of State said he will wait a few days and assess solutions to break the deadlock following last month's inconclusive general election.
He said Italy urgently needs a fully functioning government.
"From the way these days' consultations went it has clearly emerged that the talks between political parties to give life in Parliament to a majority to back a government has not made progress," Mattarella said.
"I will wait a few days to decide how to proceed to get out of the stalemate," he said.
"I pointed out to the various parties the need for our country to have a government in the fullness of its powers," he said.
Parties have been negotiating indirectly through the media since March 4 general election.
The two 'winners', the anti-migrant, Euroskeptic League led by Matteo Salvini and the anti-establishment 5-Star Movement (M5S) led by Luigi Di Maio, have been leading the media dance.
Salvini got 17.5% on March 4 to overtake ex-premier Silvio Berlusconi's centre-right Forza Italia (FI), who got 14%, as top party on the centre right and become its premier candidate.
The centre-right coalition, which also includes the small nationalist Brothers of Italy (FdI) party, came out as top alliance with 37% of the vote.
The M5S got 32.5%, becoming the top individual party by far and beating the centre-left Democratic Party (PD) of Premier Paolo Gentiloni into a distant second place.
The PD got 18%, its worst-ever showing, prompting ex-premier Matteo Renzi to resign as party leader - although he has so far imposed his line of now remaining in opposition.
Di Maio, for his part, says he must be premier and has proposed a government contract either to the League or the PD, saying that Salvini must dump Berlusconi to be a viable partner for change.
Salvini, who has said he is not insisting on being premier, is staying loyal to the three-time former premier and has said he is fed up with Di Maio's vetoes.
Di Maio has tried to entice the PD but the former governing party, now led by caretaker leader Maurizio Martina, has repeated it will stay in opposition and lick its wounds. With the stalemate continuing, Mattarella may try to give a so-called 'exploratory' mandate to someone above the fray.
An institutional figures such as FI's Senate Speaker Maria Elisabetta Alberti Casellati has been touted in some parts.
So has the League's deputy leader and Lower House Whip, Giancarlo Giorgetti.
But Salvini said Friday that handing Giorgetti an exploratory mandate would be like sending someone on a useless treasure hunt.
Replying to a question on Giorgetti's being tasked with such a mandate to try to break the government-formation impasse, Salvini told TG1 "I play treasure hunts with my kids at the seaside, the parliament and government are more serious than treasure hunts".
Salvini stressed that a mandate for Giorgetti would mean "asking someone to go looking for votes that are not there".