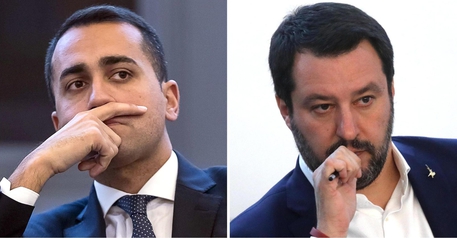 (ANSA) - Rome, April 10 - Seeing League leader Matteo Salvini before government-formation talks later this week "makes no sense now" due to Salvini's refusal to ditch ex-premier Silvio Berlusconi, anti-establishment 5-Star Movement (M5S) leader Luigi Di Maio told Il Fatto Quotidiano daily Tuesday.
"If we have to see each other to say Berlusconi yes or no, it's no use," said Di Maio, who has been negotiating from afar with Salvini since the two emerged as the two victors from the March 4 general election.
Di Maio also said he was "expecting the whole of the PD" to respond to his alternative overture for a government alliance, referring to the centre-left Democratic Party which got a pasting at the general election and has vowed to stay in opposition.
Di Maio said "we are busy writing a government contract the League or the PD can sign up to but we will have to wait for the evolution of the internal dynamics on the centre right and in the PD".
He said he wanted to be the leader of a government "to change things". Salvini said Monday that he saw a "51%" chance of the centre-right coalition striking a deal for a new government with the M5S.
But M5S leader Di Maio immediately dismissed this hypothesis, saying there was "0% possibility" of the movement joining forces with the whole of the centre-right coalition, including ex-premier Berlusconi's Forza Italia (FI). Anti-migrant, Euroskeptic League leader Salvini responded by telling ANSA that "Di Maio, at this moment in time, interests me less than zero".
If Di Maio continues to "just so no" to the centre right's alliance proposals, Italy should go back to the polls, Salvini said. "I want to dialogue, I don't want to be premier at all costs, I'm prepared to talk about programmes but if on the other side we just get Nos, let's vote and the Italians will give their vote to those they trust more and I think that will be us," Salvini said.
Salvini said the answer to Di Maio's rejection of an alliance with the centre right that includes Berlusconi "is real life: it means that if there is a team that won, I want to talk".
Salvini has said the only possible government after last month's inconclusive general is based on a deal between the centre right and the M5S, which was the top single party in the general election and says it should lead the next government. Neither the M5S nor the centre right has a majority in parliament.
But the M5S wants the League to drop FI. "The League promised change, but it prefers to keep close to Berlusconi and condemn itself to irrelevance," Di Maio said.
The centre-left Democratic Party (PD), which was pounded in the election, has said its manifesto is incompatible with the proposals of the M5S and the centre right and intends to be in the opposition in the new parliament.
Salvini has said he would not strike a deal with the main losers of the election anyway.
Salvini on Monday also dismissed the notion that the next premier could be a "third" figure - neither himself nor Di Maio - in order to break the political deadlock. "A third premier? (You can have) a fourth, fifth or 12th one, but who would vote for them?," Salvini said. "Where would the votes in parliament come from? From the centre right and from the 5-Star Movement, I imagine, if they want to reason in a serious way. "I ask Di Maio if he wants to reason or if he prefers the PD, because I saw that he says he dialogues with the PD and also with (ex-premier and former party head Matteo) Renzi. Best wishes".
The League leader said there were no more gatherings of centre-right leaders on the horizon after Sunday's meeting at Forza Italia (FI) leader Silvio Berlusconi's home at Arcore near Milan that also featured Brothers of Italy (FdI) chief Giorgia Meloni.
"We can't have summits every day," Salvini said. "Fortunately, the telephone exists in 2018". President Sergio Mattarella is set to hold a fresh round of government-formation consultations this week after the first round last week failed to throw up a path to a new executive.