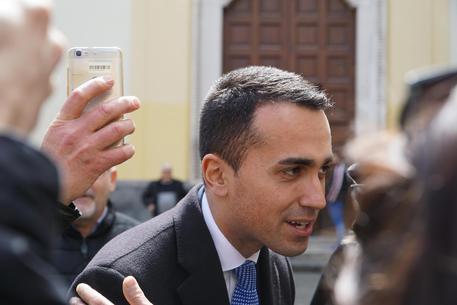 (ANSA) - Rome, April 3 - Anti-establishment 5-Star Movement (M5S) leader Luigi Di Maio on Tuesday opened up either to the rightwing populist League or the centre-left Democratic Party (PD) for a possible government but shut the door on any alliance with ex-premier Silvio Berlusconi's Forza Italia (FI), Corriere.it reported. The M5S said FI would block all attempts to reform the system.
The government would be headed by M5S chief Luigi Di Maio, as "an expression of the popular will" that made the M5S Italy's top party with 32% of the vote - although the centre-right alliance as a whole garnered 37%.
This will be the position that the M5S will take into government-formation talks with President Sergio Mattarella on Thursday, sources said.
Di Maio explained the position on Italian TV Tuesday evening, telling the Di Martedì show that he wanted to launch a "government contract" either with the League or the PD.
The PD, which got a drubbing in the general election, has ruled out any alliance, saying it will stay in opposition.
Reiterating this Tuesday, Senate Whip Andrea Marcucci said Di Maio's proposal was impossible.
"We are not ready to back a government with either him or (League leader Matteo) Salvini as premier", Marcucci said.
The League has said Di Maio must give up his premiership ambitions for any deal to be made.
League leader Matteo Salvini says FI and Berlusconi must come along with him as part of any package.