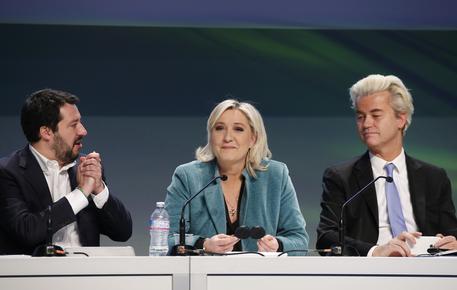 (ANSA) - Rome, March 5 - Rightist leaders Marine Le Pen in France and Geert Wilders in the Netherlands on Monday congratulated League leader Matteo Salvini for the anti-migrant, Euroskeptic party's strong showing in Sunday's Italian elections.
"The spectacular advance and the arrival in the lead of the coalition of the League led by our ally and friend Matteo Salvini is a new stage in the reawakening of the peoples," said rightist nationalist Front National (FN) leader Le Pen.
Islamophobic and anti-EU PVV leader Wilders offered his congratulations in English and Italian.
Le Pen and Wilders are in the same rightist caucus as Salvini at the European Parliament.
The League scored 16-17% according to projections, overtaking Silvio Berlusconi's Forza Italia which scored about 14%.
The two allies had been running neck-and-neck in pre-election polls,