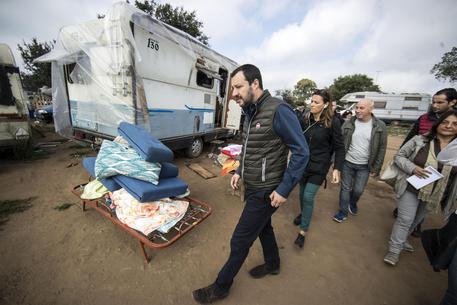 (ANSA) - Rome, October 18 - Anti-euro, anti-migrant Northern League (LN) leader Matteo Salvini staged a 'blitz' Wednesday on one of Italy's biggest and most unsanitary Roma camps, at Castel Romano outside Rome.
"It's a disgrace that must be razed to the ground...I want it and so do they," he said, referring to the camp's 1,3000 residents including some 600 children.
Salvini, who has frequently called for bulldozers to rase Roma camps, said "tens of millions of euros have been wasted here, on what was supposed to be a provisional situation but which has lasted for years". "Scabies, leprosy, mange and leptospirosis, and 500-600 kids who should be at school but instead live in alarming hygienic conditions...
"The goal is a common one, a bulldozer to demolish this disgrace".