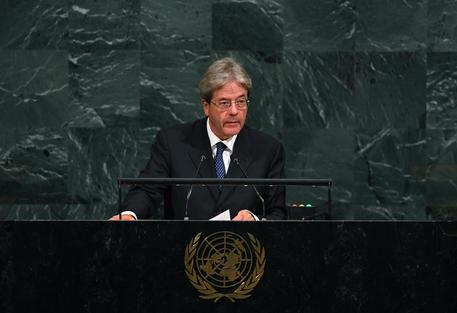 (by Claudio Salvalaggio).
(ANSA) - New York, September 21 - Italian Premier Paolo Gentiloni has told the UN General Assembly that countries cannot confront global challenges on their own or by erecting walls, relaunching a multilateral strategy and distancing himself from US President Donald Trump's approach, without ever citing him.
"Preventing conflicts, natural disasters and ensuing humanitarian and migration crises, which in turn cause instability, does not mean building barriers," Gentiloni said in his speech on Wednesday afternoon local time.
"Instead, it means implementing inclusive and sustainable development", the Italian premier said, stressing the European position traced the previous day by French President Emmanuel Macron, although with softer nuances.
Gentiloni appeared to distance himself from Trump's approach while seeking points of convergence with the US administration, as registered during a Group of Seven meeting in Taormina in May, something he noted in statements to Italian reporters before his UN address.
"Trump brought his vision, with which he won the American election, and we must respect it as our main ally", Gentiloni told Italian reporters ahead of his speech.
"Respecting it does not mean that we don't acknowledge that there are differences", he continues.
"We agree on the fight against terrorism and other challenges but there are different positions on other issues like climate change, free trade and the defense of national interests", he said, adding that "the points of contact certainly prevail by far".
"The issue is rather whether his call to the assembly to confront authoritarian regimes and dictatorships is a task that can be dealt with alone or by involving allies, and in this regard the relationship between the US and Europe is fundamental, as well as with the other members of the UN Security Council".
Gentiloni's position on North Korea is to increase international pressure while seeking a peaceful solution.
The premier also spoke about the Iranian nuclear deal in his speech at the UN saying that, "we believe the international community should ensure that the Joint Comprehensive Plan of Action can remain a success story as part of global efforts to counter the proliferation of weapons of mass destruction".
"At the same time, we are convinced of the importance of a full and integral implementation of UN resolution 2231", which calls upon Iran not to undertake any activity related to ballistic missiles designed to be capable of delivering nuclear weapons.
Talking about other challenges like terrorism, climate and immigration, Gentiloni urged to avoid "the temptation of seeking refuge in isolation, racism and intolerance".
"Italy is, and wants to remain, a welcoming country, although it is aware of the inseparable connection between the principle of solidarity and security", he explained, asking however for a global response to the phenomenon of migrations, that should start "from the European Union and touch the entire international community".
In this perspective, Gentiloni recalled that "the future of Europe is in Africa".
In this context, Italy has made progress on Libya and received the backing of French President Emmanuel Macros and British Premier Theresa May, who have expressed their "full support" for the road map of special UN envoy Ghassan Salame' and the UN's return to Libya, which opens an important window of opportunities, said the premier.
Gentiloni stressed that Italy remains "strongly involved with Libyan authorities, at all levels" and that it supports "inclusive dialogue" for a "united, democratic and stable" Libya that is free from the threat of terrorism and able to cooperate in managing migration flows.
The prime minister held bilateral talks with the leaders of Qatar, Jordan, Libya, Great Britain and South Korea on the sidelines of the UN General Assembly He also met with Egyptian President Abdel Fatah al-Sisi.
The Egyptian president took part in a high-level meeting on Libya with Gentiloni, May and Macron.