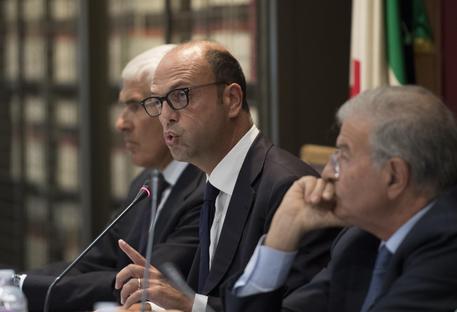 (ANSA) - Rome, September 4 - Foreign Minister Angelino Alfano said Monday that relations with Egypt were a necessity when commenting on the Giulio Regeni case and the recent decision to send an ambassador to Cairo. "It's impossible for countries that are in front of each other not to have high-level political and diplomatic relations," Alfano told a joint session of the Lower House and Senate foreign affairs committees. Last month Italy decided to send ambassador Giampaolo Cantini to Cairo, citing progress in cooperation in the investigation of the 2016 torture and murder of the Italian post-graduate student in Egypt. Cantini will take up the position September 14.
He was appointed to replace Maurizio Massari, the ambassador who was the first to see Regeni's disfigured body, but had not taken up his position due to frustration in Rome about the lack of cooperation from the Egyptian authorities.
Alfano told parliament that "Egypt is an inextricable partner of Italy, like Italy is an inextricable partner of Egypt". He said the case was "a serious injury for our conscience, for all of us and for the whole country". He admitted that "the day the body of Giulio Regeni was found, bilateral relations suffered a big blow".
Alfano also told parliament that the search for the truth about the murder of Regeni will include "the British institution for which Giulio was conducting his research" - Cambridge University. He said Cantini "will have a relationship of cooperation with his British colleague in the Egyptian capital" over the Regeni case when he takes up the role.