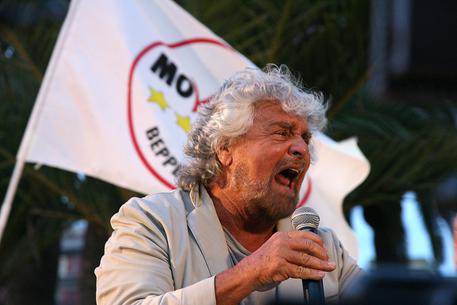 (ANSA) - Rome, June 13 - Anti-establishment 5-Star Movement (M5S) leader Beppe Grillo on Tuesday announced measures in line with Rome Mayor Virginia Raggi's recently announced closure of Roma camps, calling for "the closure of Roma camps, a census of all the illegal areas and shanty towns. "Those who say they have no income and go around in luxury cars are out. Those who ask for money in the metro, with kids in tow, are out. What's more, vigilance against purse snatchers on the metro will be raised." Meanwhile Raggi said the numbers of migrants in Rome should be restricted.
The mayor asked the interior ministry for a moratorium on new migrant arrivals in the Italian capital, given the "strong migratory presence and the continual flow of foreign citizens". Writing to Rome Prefect Paola Basilone, Raggi said "I find it impossible, as well as risky, to hypothesise further reception facilities, which would moreover have a significant impact...on the city area". In the letter, Raggi stresses the need to consider the "high migrant pressure Rome is subjected to". She said "for these reasons this administration, given the high flows of unregistered migrants, hopes the assessments of new facilities take into account the evident migrant pressure on Roma Capitale and the possible devastating consequences in terms of social costs as well as for the protection of the beneficiaries themselves." Democratic Party leader Matteo Renzi said Grillo's statements about the Roma were "the classic statements to fool Italians." He said "I demolished a Roma camp in Florence and I know what it means". He said "it takes determination, hard work." Renzi said "Grillo has a problem right now: he is realising that reality is more complicated than his blog and politics is more difficult than an algorithm".