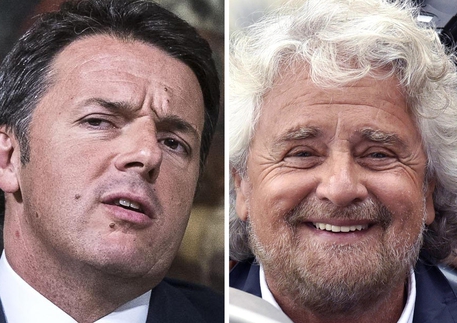 (ANSA) - Rome, June 12 - Democratic Party (PD) leader Matteo Renzi and anti-establishment 5-Star Movement (M5S) leader Beppe Grillo on Monday both hailed the results of Sunday's municipal elections across Italy despite the M5S not making the second round in any major city while the PD held up well overall despite lagging in one-time fief Genoa.
Renzi said the PD had had "good results" and wished elected mayors and second-round runners "all the best".
AS well as winning in Palermo, the PD placed first in L'Aquila, the Abruzzo capital. But Renzi stressed that he had decided to visit the quake-hit Lazio villages of Amatrice and Accumoli instead of conducting an electoral post-mortem. Renzi's trip, along with Lazio Governor Nicola Zingaretti, was a surprise one.
Grillo, meanwhile, flatly denied the M5S had flopped, saying critics and rivals which maintained this were "deluding themselves".
"The M5S was the most present political force in this electoral round. "The other parties camouflaged themselves, above all the PD which presented itself in around half the constituencies the M5S did," he said. "The results are a sign of slow but inexorable growth".
Grillo contended, further, that "They're gloating but it's the PD that is disappearing".