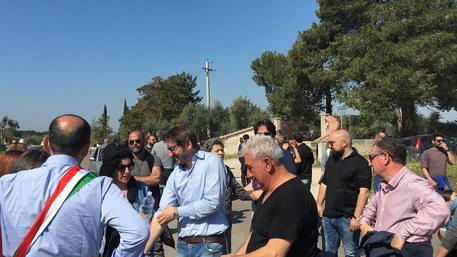 (ANSA) - Bari, April 6 - The Lazio Regional Administrative Court (TAR) on Thursday suspended an environment ministry permit for the removal of olive trees in the area of the work site for the TAP pipeline in Melendugno, Puglia, the southern region has announced. The court suspended the permit pending a hearing on April 19 on an appeal by the Puglia regional government against the permit.
There have been big protests in Melendugno over the removal of the olive trees for the Puglia section of the TransAdriatic Pipeline (TAP), which is set to bring Caspian gas from Azerbaijan to Europe. "I express the sum of the satisfaction on behalf of all the activists who have defended their land over the last few days," said Alfredo Pasiello of the 'No Tap Salento' committee.
Industry Minister Carlo Calenda said Wednesday work on the TAP should go ahead and not be "threatened by further delays".
The pipeline's arrival at Melendugno had been approved after "the most careful assessment of the alternatives," Calenda said.
Under the plan, the olive trees will later be replanted in the same place.