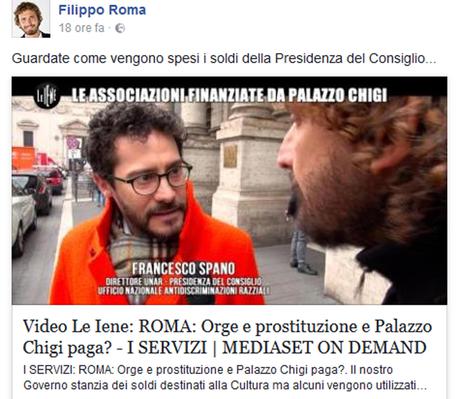 (ANSA) - Rome, February 21 - Francesco Spano said Tuesday that he had done nothing wrong and was the victim of mud-slinging the day after he quit as the head of the government's anti-racism and discrimination office UNAR. Spano resigned following a television report that alleged UNAR had allocated funding to a cultural association that organized a sort of sex club for gays. "I decided to resign not because I feel I am responsible for anything, as I consider what I have done over the last year to be correct, but out of respect for the office I had the honour of leading," Spano said. "In the coming weeks I will evaluate how to proceed to protect my honour. "What remains is the shocking consideration of how the mud- slinging machine arms cowardly people who do not hesitate to denigrate people who do their job fairly and properly". The report by Mediaset show Le Iene screened footage that suggested the association offered members a 'dark room' for sex.
It also showed clips of masseurs offering to perform sexual acts for money. Spano said the money allocated to the association in question had not actually been passed over to it.
UNAR said it does not finance associations but specific projects to fight discrimination.
Nevertheless, Spano's resignation did not stop calls from several right-wing politicians for UNAR to be closed. Spano quit Monday after being summoned by the premiership undersecretary with the brief for equal opportunities, former reform minister Maria Elena Boschi.
The TV report said it had documents suggesting that UNAR chief Spano had been a member of the association, although Spano denied this.