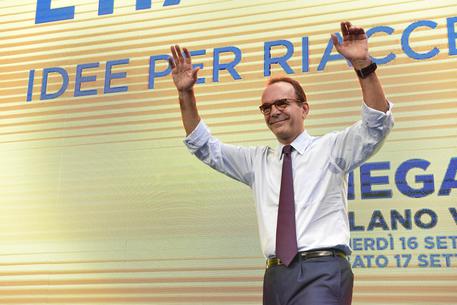 (supersedes previous)(ANSA) - Milan, November 18 - Businessman-turned-politician Stefano Parisi on Friday launched a new centre-right group called Energie per l'Italia - Energy for Italy. "Today we announce the launch of a new political movement, an important contribution for the centre right," Parisi said in Milan. "It's an alternative movement to (center-left Premier Matteo) Renzi and to the Left... (we are) convinced of the need for great political renewal".
Parisi went on to say he doesn't feel betrayed by ex-premier Silvio Berlusconi and his center-right Forza Italia (FI) party. "Do I feel Berlusconi betrayed me politically? No, because we weren't engaged. I haven't been fired, because I was never hired," said Parisi, who in June this year ran for mayor of Milan on a center-right ticket with backing from FI, the populist anti-immigrant Northern League, and the small rightwing Brothers of Italy (FdI) party. "But FI can't go on the way things are now," Parisi said.
Berlusconi said last Tuesday that Parisi "wants a role in the center-right but, given disagreement with (Northern League leader Matteo) Salvini, I don't think he can have it." On Friday, Parisi said he believes some FI supporters will vote 'Yes' in a December 4 referendum on Renzi's constitutional reform law, which would, among other measures, cut the Senate by two thirds and reduce its lawmaking powers.
"It is legitimate for them to do so," Parisi said. "I'll be voting 'No', but not in order to drive Renzi out - we believe (he) should be defeated in democratic elections".
Parisi added that the young reformist Democratic Party (PD) premier "made the mistake of splitting the country and the center-right (over the referendum)". He also denied being funded by Berlusconi. "He helped us during the (mayoral) electoral campaign, but everything we've done since July has been self-financed," Parisi said.