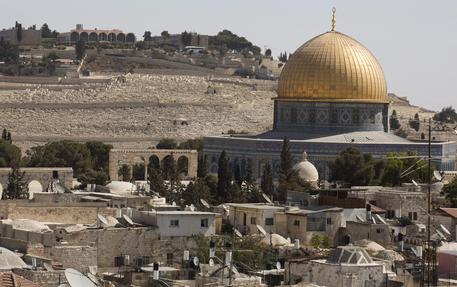 (ANSA) - Venice, October 20 - The countries, like Italy, which abstained in a UNESCO vote on a controversial resolution that makes no reference of Jewish ties to a key holy site are accomplices to terror, Venice Chief Rabbi Scialom Bahbout said Thursday. Bahbout said the countries who abstained on the resolution "which denies the close relationship of the Jewish people with Jerusalem and the Temple Mount have collaborated with a terrorist act which aims to wipe out thousands of years of history". Bahbout was speaking in a message to a conference being held in Venice by the European People's Party entitled 'Building the Peace and Security of Europe and Neighbouring Peoples'. The resolution, the rabbi said, "enacts a lie". Israel suspended ties with the UN cultural agency after it adopted a resolution on Temple Mount (known to Muslims as the Haram esh-Sharif) and the Western Wall in Jerusalem, ignoring any Jewish connection. UNESCO said the places should be referred to only by their Arabic names. The resolution also condemned Israel for restricting Muslims' access to the holy site and denounced aggression by Israeli police and soldiers.
Israel has accused UNESCO of trying to rewrite history.
Jews refer to the hilltop compound in Jerusalem's Old City as the Temple Mount. Muslims refer to it as al-Haram al-Sharif, Arabic for the Noble Sanctuary, and it includes the Al-Aqsa mosque and the golden Dome of the Rock. It is the holiest site in Judaism and the third holiest in Islam, after Mecca and Medina in Saudi Arabia.
According to Islamic scholars, the rock is the spot from which the Prophet Muhammad ascended to Heaven accompanied by the angel Gabriel.
The UNESCO board adopted the resolution by consensus Tuesday at the Paris headquarters of the United Nations Educational, Scientific and Cultural Organization. A draft form of the resolution had already been approved by a commission last week.
Israel suspended its cooperation with UNESCO over the resolution last week, though it is not clear what programs the suspension will affect. Israel had already suspended its funding to UNESCO when Palestinian membership was approved, along with the United States, which used to provide 22% of the agency's budget.