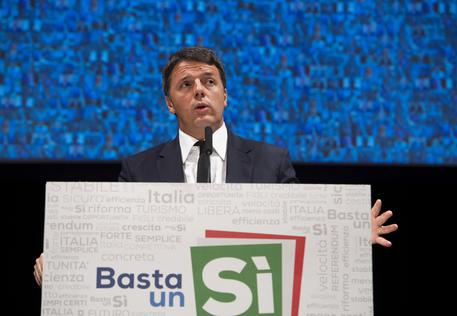 (ANSA) - Rome, October 5 - The opposition Italian Left (SI) party and the anti-establishment 5-Star Movement (M5S) on Wednesday filed an appeal to the Lazio regional administrative court (TAR) against the wording of the question in the December 4 referendum on the government's overhaul of Italy's political machinery, claiming that it amounted to an "advertising spot, as suggestive as it is incomplete and misleading". The appeal said the question "favoured a government that has taken the initiative of the reform and now improperly asks confirmation from citizens, who do not deserve to be deceived in such a blatant way".
Premier Matteo said in a recent BBC interview that the referendum on his government's reform of Italy's notoriously expensive and inefficient political machinery was risky, but one worth taking.
"Yes, it's risky. But it's impossible to achieve change in Italy without taking a risk," he said. "I think that not many Italians will say No to reducing bureaucracy and politicians' wages".
His reform includes reducing the Senate into a leaner assembly of local government representatives with limited powers to cut costs and streamline Italy's notoriously ponderous method of passing legislation. It also does away with the National Council on Economy and Labour (CNEL) - an organ with 64 councillors plus a president - and completes the elimination of Italy's 110 provinces on the premise they are redundant and expensive.
Critics say the reform will make lawmaking more complicated.