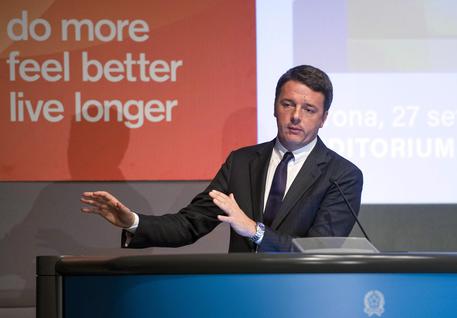 (ANSA) - Rome, September 28 - Premier Matteo Renzi called on voters not to use the December referendum on his government's reform overhauling Italy's political machinery to get rid of him. "Don't use the referendum with the desire to bring down the government," Renzi told RTL 102.5 radio. "It would be a lost opportunity. It's better to vote on the merits (of the package)". The reform amends the Italian Constitution and, among other things, turns the Senate into a leaner assembly of local government representatives with limited powers.
It is aimed at saving money and making it easier to pass legislation.
Renzi had said he would quit if he loses the referendum, but has recently played this down, saying it was a mistake to personalise the vote.
Almost all of Italy's opposition groups are campaigning for a No vote.
Renzi said Silvio Berlusconi, another ex-premier, Massimo D'Alema, a member of a rebel minority within his centre-left Democratic Party (PD), and other figures from Italy's political old guard were in favour of a No vote because they saw it as an opportunity to "return to the field". D'Alema dismissed the allegation, saying Renzi was attacking the Italian people for being "naive".
"Renzi keeps repeating this nonsense about Berlusconi and D'Alema wanting to use the referendum to make a comeback," D'Alema said.
"I don't intend to seek public positions. I assert my right to oppose the reform as I judge it to be bad and damaging".