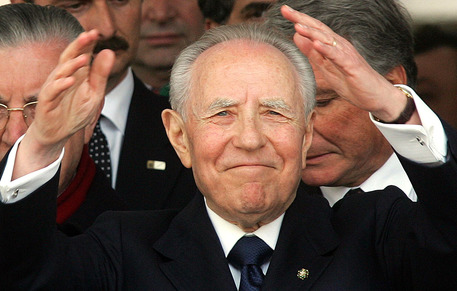 (ANSA) - Rome, September 16 - Former Italian president Carlo Azeglio Ciampi has died at the age of 95, ANSA sources said on Friday.
Born in Livorno in 1920, Ciampi was head of State from 1999 to 2006. He was popular and widely respected for his ability, intelligence and impartiality.
He also had a stint a premier, from 1993 to 1994, and served for 14 years as the governor of the Bank of Italy, up to 1993.
"The government embraces Signora Franca," Premier Matteo Renzi tweeted, referring to Ciampi's wife. "A thought of gratefulness goes to a man of the institutions, who served Italy with passion".

Pope Francis also paid tribute. "He undertook public responsibilities with gentlemanly discretion and a strong sense of the State," the pontiff wrote in a telegram to Ciampi's widow.

Ciampi died in Rome's Pio XI clinic, where he had been for several days after a deterioration in his health conditions, his doctor Andrea Platania said on Friday. "I'm with the family. At the moment I ask for privacy," said Professor Platania.
Ciampi, a life Senator, would have turned 96 in December.
Domenico Marchetta, the head of the ex president's office in the Senate, said the funeral will take place in Rome.

President Sergio Mattarella said "Italians will not forget" Ciampi. "They will continue to appreciate him and to consider him an example of competence, dedication, generosity, and passion," he said, calling Ciampi "a great Italian and a great European".