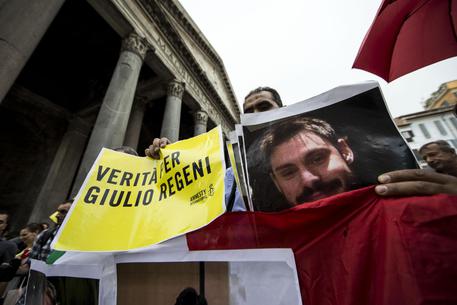 (ANSA) - Rome, September 9 - Italian and Egyptian investigators said Friday that two days of meetings in Rome on the case of Giulio Regeni, an Italian student who was tortured and murdered in Cairo this year, had concluded with a joint commitment to get to the bottom of the case. Regeni, 28, went missing on the night of January 25, the heavily policed fifth anniversary of the uprising that toppled former strongman Hosni Mubarak, and his burned, mutilated, and partially unclothed body turned up in a ditch on the road to Alexandria on February 3.
Cairo police investigated Giulio Regeni for three days in January before he disappeared later in the month, Egypt's prosecutor general said in a joint statement on Friday. It said that the investigation started after the head of an independent union of street traders filed a petition. It said the probe lasted three days and "did not uncover any activity of interest for national security and, therefore, the investigations were stopped".
The case has created a great deal of tension between the two countries.
Egypt has repeatedly denied its security forces were behind the torture and murder of Regeni, a Cambridge doctoral student researching Egyptian trade unions.
Egyptian authorities have offered up a series of unlikely explanations ranging from a car crash, to a gay lovers' quarrel gone wrong, to a kidnap for ransom that turned deadly.
Italy has rejected all those versions.
Human rights groups say Regeni is among hundreds of people who have disappeared in Egypt over the last year.
A joint statement said the meeting concluded "with a renewed commitment by both offices to continue to exchange documents and information to reach the common aim of establishing the truth about the death of Giulio Regeni". The third such meeting on the case "served to provide a fruitful comparison on the elements so far gathered by the two offices," the statement said. "In particular, the Egyptian prosecutor-general illustrated and handed over the ample, complete and in-depth report on an examination of cellphone traffic covering the areas of (Regeni's) disappearance (on January 25) and the discovery of his body (on February 3).''