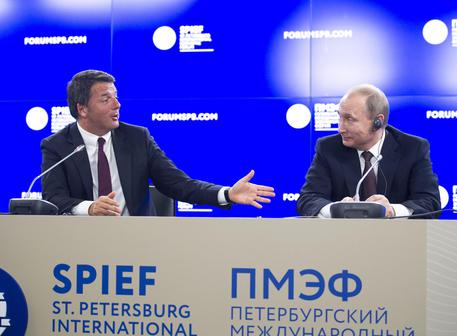 (by Stefania Fumo).
(ANSA) - St Petersburg, June 17 - Premier Matteo Renzi said Friday that Italy is working to restore relations between the EU and Russia that were badly damaged by the Ukraine crisis. "We're working to build bridges," Renzi said in St Petersburg. "This is Italy's objective. Italy thinks dialogue is needed, not closure. That's why today is important - we think the reasons that bring us together are more than the ones that divide us". Renzi spoke during a visit to a worksite of Italian firm Astaldi in the Russian city after a private visit to the Hermitage Museum. He later addressed the St Petersburg International Business Forum and met with Russian President Vladimir Putin, and said the Italian business delegation he is leading will have signed deals worth over a billion euros by the end of the day. "Today we will sign agreements for over one billion euros," he said. "Legitimate agreements within the framework on the sanctions (imposed on Russia over the Ukraine crisis), because we respect the rules". He later told the Forum that "pacts must be kept - we have made efforts to reach the Minsk protocol (ending the war in east Ukraine), and everyone must respect the agreements." He said "Europe and Russia have shared values and they are values that I, dear Vladimir, touched first-hand in the business agreements and in my visit to the Hermitage where I felt immersed in the beauty of universal values".
Putin in his speech to the Forum said Renzi "is a great orator, I compliment him on his speech. Italy can be proud of such a premier". He also said Russia doesn't want a new Cold War.
"We don't want the Cold War, it isn't necessary, I don't think anyone wants it," Putin said. "But if we continue to frighten each other, and NATO continues to have to have an enemy to justify its existence, I can't exclude that we'll arrive at a Cold War".
Renzi replied that the term 'Cold War' is a thing of the past and can't be included in a 21st-century vocabulary. "The EU and Russia must become very good neighbours again," the Italian premier said.