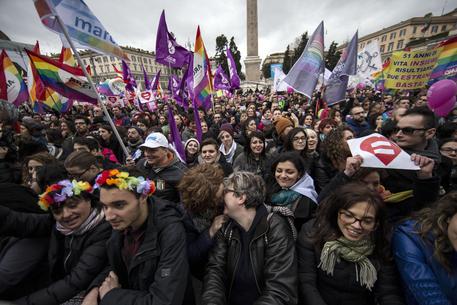 (ANSA) - Rome, May 4 - The Lower House justice committee on Wednesday approved the Senate version of the government's civil unions bill, paving the way for it to go to the House floor on Monday, May 9. Lawmakers from the center-right Forza Italia (FI) party, the rightwing populist Northern League, and the small centrist Area Popolare (AP) and DS-CD caucuses were absent in protest against Premier Matteo Renzi's announced intention to put the bill to a confidence vote.
The bill cleared its first major hurdle when the Senate approved it with a vote of confidence on February 25 this year.
The motion was approved with 173 in favor, 71 against and none abstaining. Senators from the anti-establishment 5-Star Movement (M5S) boycotted the vote.
The bill passed after Renzi's center-left PD scrapped two key measures in a compromise with Catholic conservatives - one that would have allowed stepchild adoptions and the other imposing a duty of fidelity.
The bill's rapporteur, PD Senator Monica Cirinna', said the confidence vote on this watered-down version of the bill was a hollow victory.
"It's first step - a victory with a hollow heart," said Cirinna'. "This is a very important measure, but I am also thinking of the children of so many friends".
"Now we must take a second step," Cirinna' said. "We're halfway up the ladder".
Renzi hailed the vote on "a day that will remain in the history of this legislature and of our country".
"By requesting a confidence vote, we bound the government's very survival to a civil rights battle," the premier wrote on Facebook.
On the following day, the Council of Europe called the Senate vote "a first step" but said that in order for Italy to fully comply with a ruling by the European Court of Human Rights, it must eventually add a provision for same-sex couples to adopt children.
"The text approved yesterday by the Italian Senate is in line with what the European Court of Human Rights asked in the Oliari sentence," said Council of Europe Secretary General Thorbjorn Jagland.
That July 2015 ruling regarded the case of three gay couples who said their inability under Italian law to establish a legal union was a violation of the right to family life.
"The next step will be a law that allows adoption, in order to eliminate this remaining discrimination and fully align Italian laws with jurisprudence of the European Court of Human Rights," said Nils Muiznieks, Council of Europe Commissioner for Human Rights.