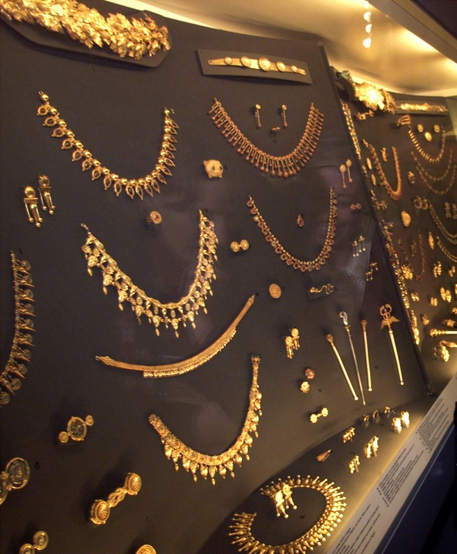 (By Denis Greenan). (ANSA) - Rome, April 14 - Carabinieri art police have tracked down and recovered items from the Castellani collection of precious gold jewelry that were stolen at Easter 2013 from the National Etruscan Museum at Rome's Villa Giulia, officials said Thursday. The objects were crafted in the 19th century, in part using material from the excavation of ancient Etruscan, Greek and Rome sites. "It's a great day, now the gold will return to the museum," said Culture Minister Dario Franceschini. Officials said the Carabinieri's crack Cultural Heritage Protection Unit - one of the world's most famous divisions of art police - had managed to recover 23 of the the 27 precious items of jewelry worth a total of three million euros stolen from Villa Giulia in April 2013. The operation led to the identification of the band of people who allegedly carried out the robbery and those who allegedly received the items. Six people have been notified that the investigation is over, a move that frequently comes before a trial request.
The case was handled by Giancarlo Capaldo, coordinator of the crimes against cultural heritage group of the Rome prosecutor's office, and Tiziana Cugini, the prosecutor heading up the probe.
Judicial sources said a rich Russian woman commissioned the theft of the jewels, which went through the hands of a Roman antiques dealer who acted as middle man.
Capaldo and Culture Ministry Secretary-General Antonella Recchia revealed the details of partial results - the probe is ongoing - of the long investigation which led to 23 of tghe 27 stolen objects being recovered.
The deal, which was meant to take the jewels abroad, went belly up, they said, amid the loud media clamour sparked by the heist.
The woman, identified in the first days of the probe, was stopped and ID'd at Fiumicino Airport as she was leaving for St Petersburg.
Accompanied by the daughter of the antiques dealer, was carrying a catalogue of the Castellani jewels and had on her i-Phone some photos of the museum room where the theft took place, with all the details of the surveillance system. Once the deal went south the thieves contacted local fences, Capaldo and Recchia told reporters.